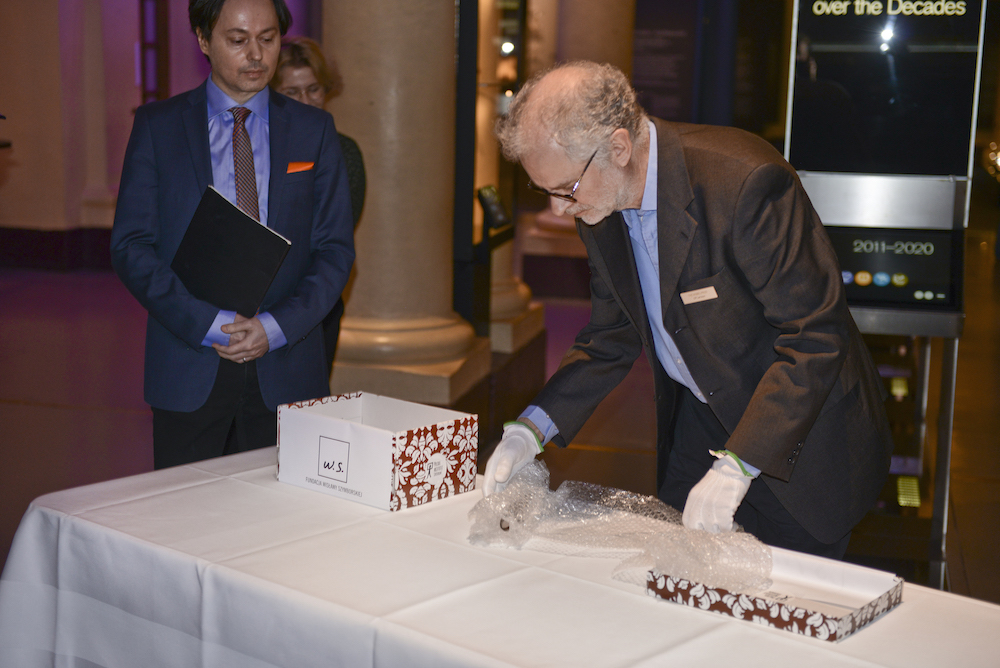 A pair of glasses, a pen and a thank you card will now be added to the Nobel Prize Museum’s growing collection of artefacts related to the laureates. The museum already has such items as a handwritten manuscript from Albert Einstein and the shawl that peace prize laureate Malala Yousafzai wore when she gave a speech to the UN General Assembly.

“We always ask laureates who visit us to bring along an object that has meant something special to them. It helps us to convey their stories. Sometimes we also receive donations that are connected to laureates who are no longer alive,” says Erika Lanner. Director of the Nobel Prize Museum.

During the ceremony the story behind the glasses was told. Szymborska did not use the glasses to read. Instead, she wore them to disguise herself when she went out. She was never photographed with her glasses on, so when she wore them she was difficult to recognise. They became a good form of protection against autograph hunters and admirers.

The other two artefacts being donated to the museum are a ballpoint pen that Szymborska used to make corrections in her manuscripts and a thank you card. Szymborska spent a lot of time sending out thank you cards to everyone who congratulated her on the Nobel Prize.

On 19 November, the artefacts will be on display during an evening programme at the museum. Author Agneta Pleijel and cultural writer Stefan Ingvarsson will converse with Carin Klaesson of the Nobel Prize Museum about Szymborska. Their Swedish-language conversation will be followed by a concert featuring award-winning Polish pianist and composer Hania Rani, whose debut album “Esja” has attracted worldwide acclaim. The programme is made in cooperation with the Polish Institute in Stockholm.

More information is available at: https://nobelprizemuseum.se/en/a-poetic-tribute-to-wislawa-szymborska-a-concert-featuring-hania-rani/

Wisława Szymborska was awarded the Nobel Prize in Literature “for poetry that with ironic precision allows the historical and biological context to come to light in fragments of human reality”. Szymborska was born in the city of Bnin (now Kórnik), Poland in 1923 and died in Kraków in 2012. The Wisława Szymborska Foundation was established in April 2012 in accordance with the will of the laureate.

Press images are available at: https://nobelprize.org/press-images-nobel-prize-museum