Paul Ehrlich was a pioneer in the research of the immune system, a field of research which developed at the end of the 19th century. Ehrlich was the first to use the term “antibody”.

Paul Ehrlich collaborated with Emil von Behring in developing serum therapies but did not share the 1901 Nobel Prize in Physiology or Medicine given to Behring. Ehrlich instead shared the 1908 Medicine Prize with Ilja Metjnikov for their discovery of the immune system. Ehrlich was also a close friend of another pioneer within immune system research, Robert Koch. He received the 1905 Medicine Prize for his studies on tuberculosis. 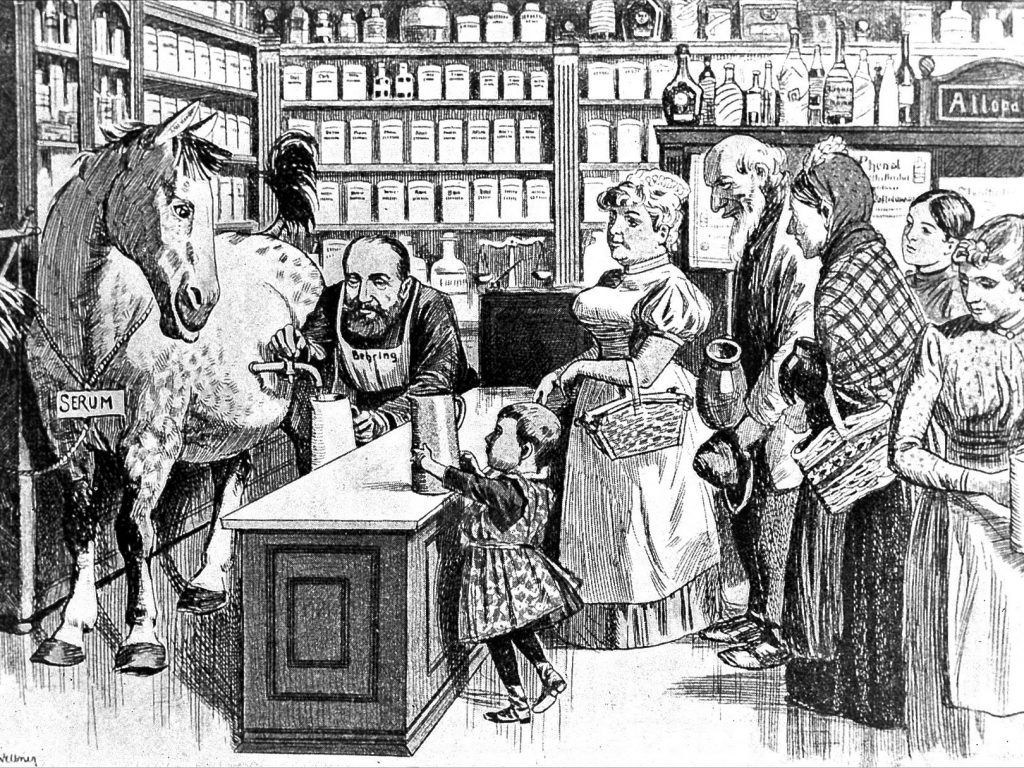 When we are attacked by viruses or bacteria, the immune system mobilizes to respond. Part of this response includes forming antibodies. These can then remain in the blood and provide immunity against future infections. In the 1890s, Emil von Behring and other researchers showed that antibodies in blood plasma, serum, can be transferred from one person to another, providing immunity. In 1900, Behring introduced serum from immune horses as a cure and preventive measure for diphtheria.

To fight all viruses, bacteria and other damaging substances that we can be exposed to, we have to have the capacity to produce enormous amounts of different antibodies. The production of antibodies is controlled by genes, but the number of genes is much smaller than the number of different antibodies that can be produced. In 1976, Susumu Tonegawa showed how this was possible. The genetic material in B cells, a type of white blood cell, has the ability to move and form new combinations while B cells are forming to produce antibodies.

Susumu Tonegawa was awarded the Nobel Prize in Physiology or Medicine in 1987.

This was written in the motivation for his prize:

Tonegawa’s discoveries have increased our knowledge about structure of our immune defense. They also open up possibilities to increase the immune response against pathogenic microorganism through vaccination – and also to improve inhibition of unwanted immune reactions.