Polio is an illness that often affects children and young people and that can lead to permanent paralysis.

Polio is a highly infectious RNA virus belonging to the genus Enterovirus. The virus only infects humans and enters the body via droplets such as sneezing and coughing, or through contact with infected people’s feces. Usually, polio infects our respiratory and intestinal tract, but sometimes the virus spreads to the spinal cord and can then cause paralysis. The virus mainly affects children, but most of those infected show no or very mild symptoms.

Vaccines are a way to help our immune system fight viruses. The immune system is the body’s defence mechanism against attacks from viruses and bacteria. A number of Nobel Laureates have researched the immune system and contributed to the development of vaccines. 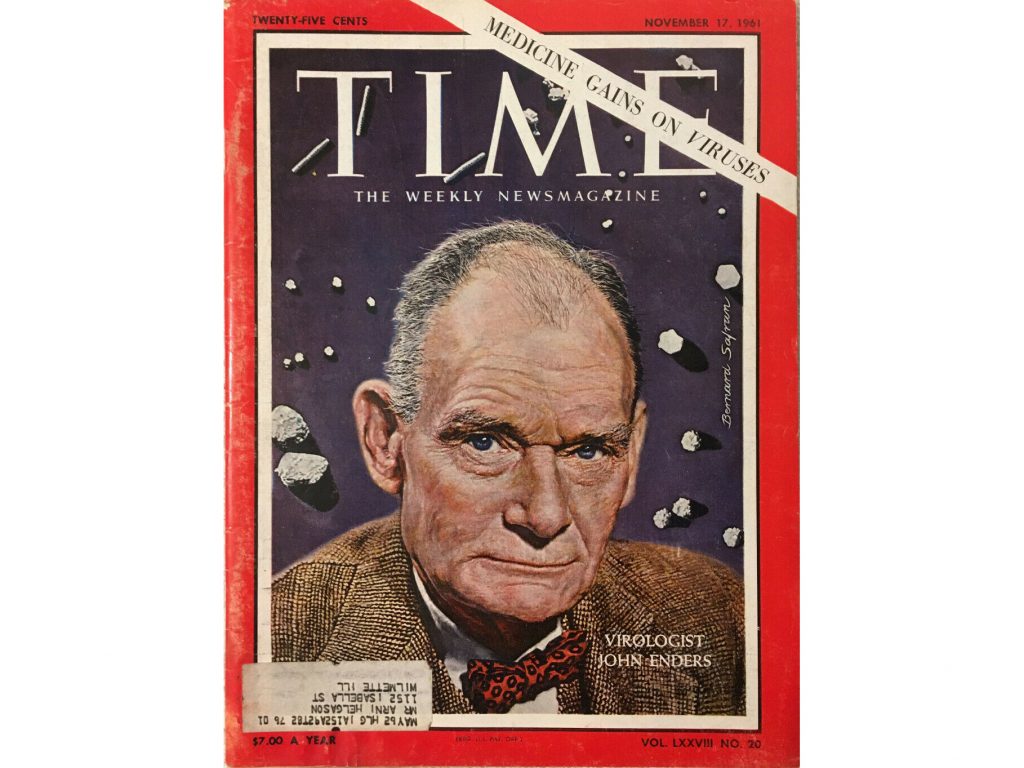 One researcher occupied with developing vaccines is John Enders. He has been called the father of modern vaccines. Here he is shown on the cover of Time magazine from November 1961. In 1949, John Enders, Thomas Weller and Frederick Robbins succeeded in culturing in the laboratory the virus that causes polio. This was the first time researchers succeeded in culturing a virus, a feat many thought impossible. This research was crucial in the development of a vaccine against polio. John Enders, Thomas Weller and Frederick Chapman Robbins were awarded the Nobel Prize in Physiology or Medicine in 1954.

The disease polio, which throughout history has been a major cause of death, paralysis and life-long disabilities, has now almost been eradicated in large parts of the world by effective vaccination programs. According to the World Health Organization (WHO), polio is found primarily in Afghanistan, Nigeria and Pakistan where only a few cases are reported every year.

Enders, together with Thomas Peebles, later studied the virus that causes measles and was successful in developing a vaccine against the disease in the early 1960s.