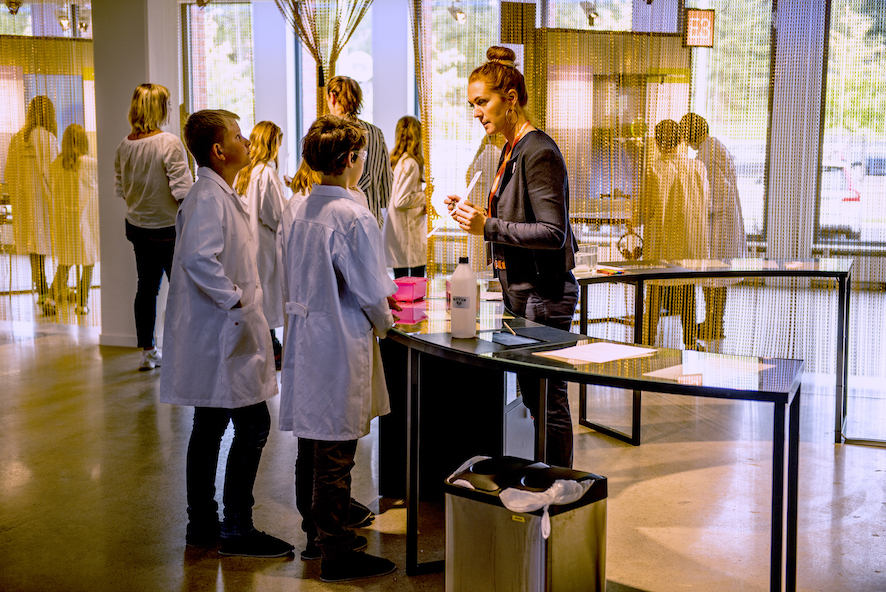 Photo from the exhibition Experiments, 2018 in Markaryd.

In his will, Alfred Nobel wrote that the prizes he was establishing should be awarded to those who had conferred the greatest benefit to humankind. Since 1901, this has been the guiding principle of the Nobel Prize. For the Nobel Prize Museum, it is important that the institutional partners that work with the Museum share the values that underlie such an ambition.

“We want to reach out to schools all over Sweden and inspire young people to join in contributing to a better world in the spirit of the Nobel Prize. Our collaboration with NIBE is entirely consistent with this. We are very pleased with this partnership,” says Erika Lanner, Director of the Nobel Prize Museum.

“For several decades, NIBE has worked very closely with the schools in the municipality of Markaryd, from first grade all the way through upper secondary school. Natural sciences and sustainability issues are genuinely close to our hearts at NIBE, so it feel very exciting to be able to initiate a long-term partnership with the Nobel Prize Museum focusing on these specific subject areas,” says Gerteric Lindquist, CEO of NIBE Industrier, which has its head office in Markaryd but operates on several continents.

About the Nobel Prize Museum

The Nobel Prize shows that ideas can change the world. The courage, creativity and perseverance of the Nobel Laureates inspire us and give us hope for the future. By means of videos, in-depth guided tours and donated artefacts, we at the Nobel Prize Museum tell about the Laureates and their contributions for the greatest benefit to humankind. Based on the Nobel Prize’s unique combination of fields – natural sciences, literature and peace – we examine the great issues of our time and show how we can respond to them with science, humanism and cooperation. Through our exhibitions, school programmes, lectures and dialogues, we at the Museum would like to generate public engagement for a better world. Today we are located on Stortorget, the main square in Stockholm’s Old Town. In the future we will be creating a new home for the Nobel Prize in the heart of the Swedish capital.

NIBE is a global Group that contributes to a smaller carbon footprint and better utilisation of energy. In our three business areas – Climate Solutions, Element and Stoves – we develop, manufacture and market a wide range of eco-friendly, energy-efficient solutions for indoor climate comfort in all types of property, plus components and solutions for intelligent heating and control in industry and infrastructure. It all started in Markaryd in the Swedish province of Småland more than 70 years ago, and from there NIBE has grown into an international company with 16,600 employees and a presence worldwide.