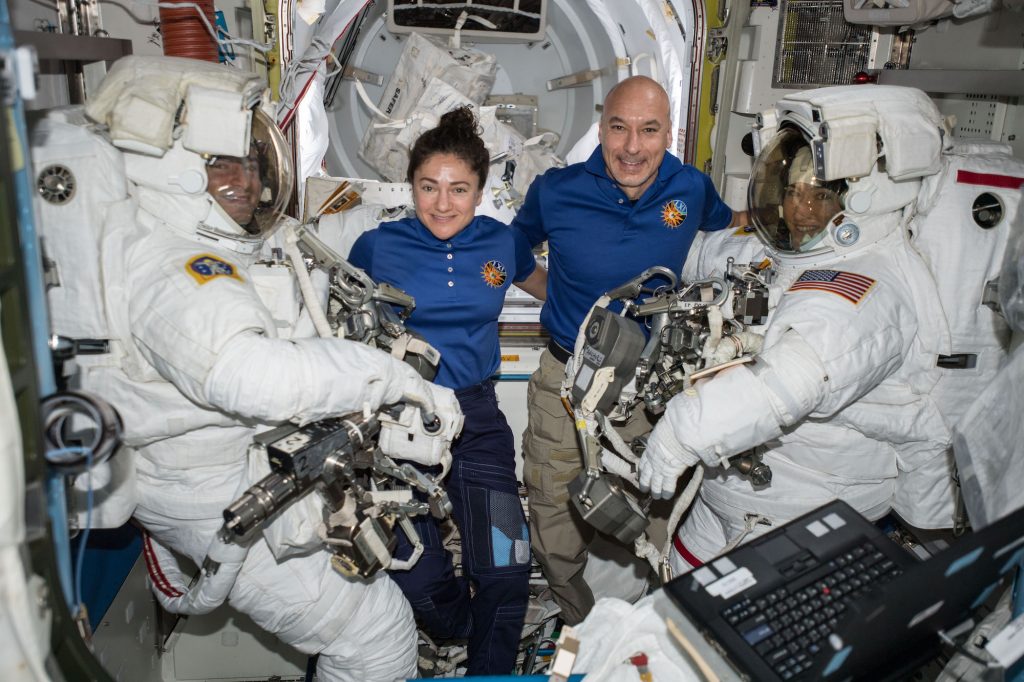 Some of the brightest minds on Earth will talk to astronauts on the International Space Station about their perspective of the Universe, exoplanets and the challenges of spacewalking.

Their discoveries are crucial to the work taking place on the International Space Station.

This year the Nobel Prize in Physics rewards new understanding of the Universe’s structure and history, and the first discovery of a planet orbiting a solar-type star outside our Solar System. Cosmology and exoplanets are among the key themes investigated by ESA’s space science missions, with exo-planet hunter Cheops launching later this year.

The Nobel Prize in Chemistry rewards the development of the powerful lithium ion battery. Jessica will recount first-hand how she helped install new lithium-ion batteries during her recent spacewalk to improve the Station’s power capacity following spacewalks with ESA astronauts Tim Peake and Thomas Pesquet on other spacewalks to upgrade to lithium-ion batteries.

Luca is deeply involved in several challenging spacewalks to service the International Space Station’s largest scientific instrument. The Alpha Magnetic Spectrometer (AMS-02) is a sub-atomic particle detector that looks for dark matter, antimatter and measures cosmic rays – high energy particles that travel through space at close to the speed of light.

The European astronaut has carried out two spacewalks to date to maintain AMS-02’s cooling system and ensure it can continue to provide more groundbreaking science to the scientific community for and its principal investigator Samuel Ting, who received the Nobel Prize in Physics in 1976.

All the Nobel Laureates of 2019, who will visit the museum the same morning, are invited to the event. Members of the Nobel committees and general public will be part of the audience.

The event will start at 14:45 with a question and answer session with the Nobel Laureates, moderated by Anna Sjöström Douagi, Science and Program Director, Nobel Prize Museum.

Media are invited to watch the livestream of the in-flight call on ESA Web TV: https://www.esa.int/ESA_Multimedia/ESA_Web_TV

Media wishing to follow the video call from the Nobel Prize Museum in Stockholm, Sweden can apply for accreditation via press2019@nobelprize.org by 2 December at the latest.

No filming is allowed at the venue.

The Nobel Prize shows that ideas can change the world. The courage, creativity and perseverance of the Nobel Laureates inspire us and give us hope for the future. Videos, in-depth guided tours and donated artefacts tell about the Laureates and their contributions for the greatest benefit to humankind. Based on the Nobel Prize’s unique combination of fields – natural sciences, literature and peace – we examine the great issues of our time and show how we can respond to them with science, humanism and cooperation. Through our exhibitions, school programmes, lectures and dialogues, we at the Museum would like to generate public engagement for a better world. Today we are located on Stortorget, the main square in Stockholm’s Old Town. In the future we will be creating a new home for the Nobel Prize in the heart of the Swedish capital.