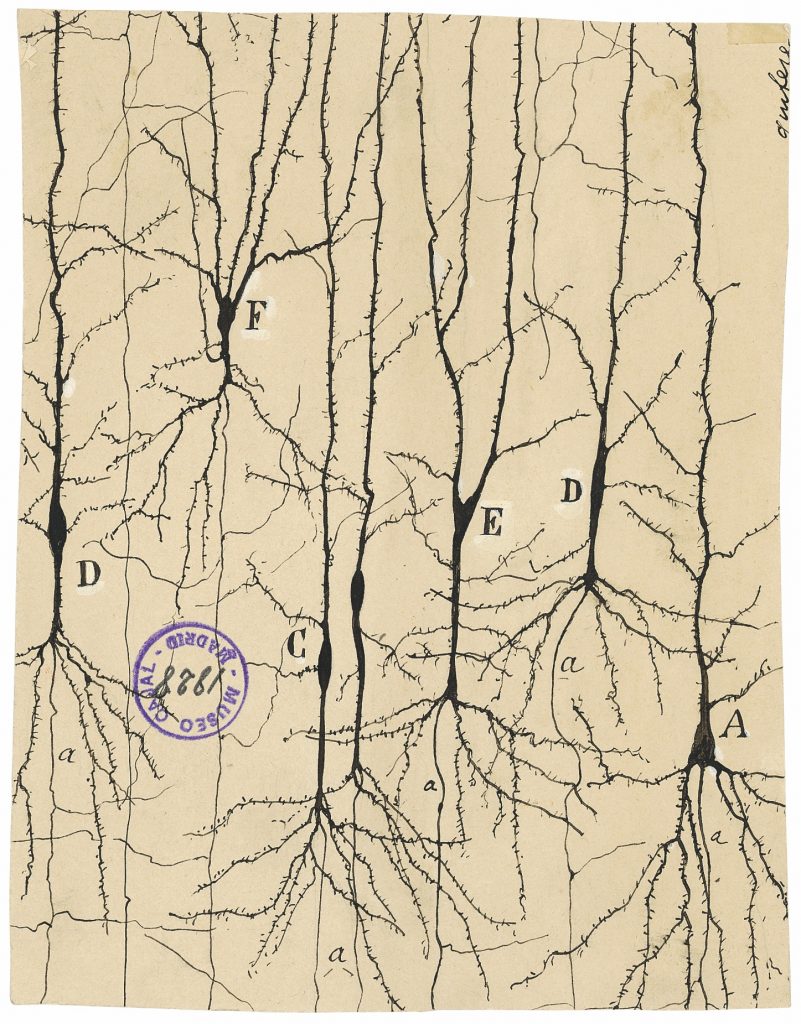 In the late 19th and early 20th century, scientists took decisive steps towards a deeper knowledge of how the human brain and the nervous system function. Perhaps one of the most important pioneers of neuroscience was Santiago Ramón y Cajal (1852-1934) of Spain, who received the Nobel Prize in Physiology or Medicine in 1906 for his research about the nervous system. With the aid of methods for colouring cells so they could be studied under a microscope, Cajal successfully mapped different types of nerve cells in the brain. Cajal, a medical doctor, was also a highly talented artist. His drawings of what he saw under the microscope showed the nervous system with marvellous clarity.

“Cajal’s gift to posterity consists not only of his pioneering scientific achievements. He also gave us his artistry, and works that enabled the convoluted patterns of human nerve cells to be visualised and made comprehensible. His drawings are a fine example of how art and science can be woven together,” says Erika Lanner, Director of the Nobel Prize Museum.

Their Majesties King Felipe VI and Queen Letizia of Spain, together with Their Majesties King Carl XVI Gustav and Queen Silvia of Sweden, will receive a guided tour of the exhibition entitled Synapses: Science and Art in Spain, from Ramón y Cajal to the 21st Century. In addition to Cajal’s drawings, the exhibition will feature works by a number of people who had contact with him, including poet Federico García Lorca and artist Salvador Dalí. It will also display works by five contemporary visual artists who have been strongly influenced by Cajal. These works are connected in various ways to international scientific projects.

The exhibition will be on display from 25 November to 4 December and is the result of a collaboration between three Spanish government ministries − the Ministry of Foreign Affairs, European Union and Cooperation; the Ministry of Education; and the Ministry of Science and Innovation − in partnership with the Cervantes Institute and the Provincial Council of Huesca. The curator of the exhibition, which is on loan to the Nobel Prize Museum, is Juan Manuel Bonet.

Santiago Ramón y Cajal and the Italian pathologist Camillo Golgi were jointly awarded the 1906 Nobel Prize in Physiology or Medicine “in recognition of their work on the structure of the nervous system”.

Press briefing
There will be a press briefing for media on 24 November at 15.00. Curator Juan Manuel Bonet will attend. Please contact Rebecka Oxelström, Head of press at the Nobel Foundation, if you would like to attend. rebecka.oxelstrom@nobelprize.org.

Nobel Prize Museum
The Nobel Prize shows that ideas can change the world. The courage, creativity and perseverance of the Nobel Laureates inspire us and give us hope for the future. Films, in-depth tours, and artefacts tell the stories of the Laureates and their contributions ‘for the greatest benefit to humankind’. Based on the Nobel Prize’s unique combination of fields – natural sciences, literature and peace – we examine the greatest challenges of our time and show how we can respond to them through science, humanism and collaboration. With our exhibitions, school programmes, lectures and conversations, we at the Nobel Prize Museum strive to engage the public in making a better world. Today we are located at Stortorget in Gamla Stan, Stockholm’s Old Town district. We are planning to create a new home for our public outreach activities at Slussen in downtown Stockholm.

Disclaimer: Nobel Prize Museum is not directly or indirectly involved in the pro­cess of nominating or selecting Nobel Prize laureates. These procedures are strictly confiden­tial and regulated by the Nobel Prize awarding institutions.