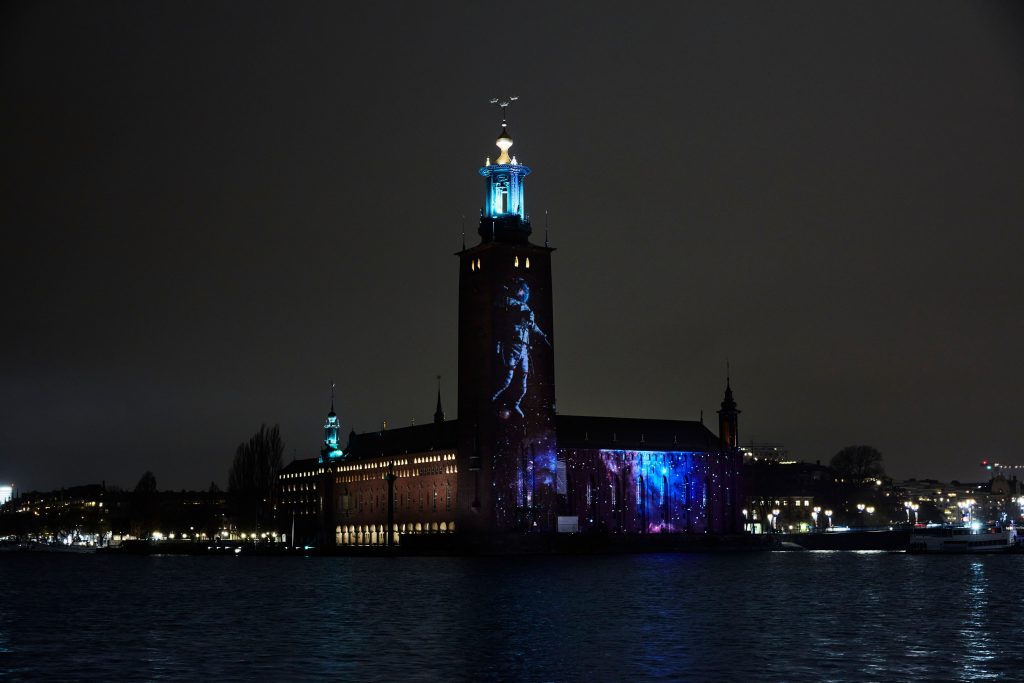 Photo: Per Kristiansen. Space on Stockholm City Hall, produced by Lumination of Sweden, PXLFLD and Creative Technology in collaboration with the Swedish National Space Agency and the European Space Agency.

On Wednesday, June 23, the City of Stockholm approved continued support for the event in 2021, with an option for an additional two years. The City’s financial contribution would total SEK 15 million over the three-year period.

“Nobel Week Lights was highly acclaimed and well-publicised last year. It was wonderful to see so many iconic Stockholm buildings in a new light. This is an open-air event with our urban environment as the arena. It is a welcome addition during low season for the hospitality industry and the darkest period of the year. These light installations have real potential to develop into a recurring festival − with a clear connection to Stockholm and to the creativity and innovative power that exist here,” says Anna König Jerlmyr, Mayor of Stockholm.

Nobel Week Lights Stockholm is initiated and produced by Annika Levin, Alexandra Manson, Lara Szabo Greisman and Troika AB. The festival is part of the Nobel Week programme and is implemented in collaboration with the Nobel Prize Museum, with support from the City of Stockholm as well as several other partners and lighting companies.

“The festival was a welcome new feature of the Nobel Week. It was fun to see that the light installations had been inspired by the Nobel Prize in so many creative ways. A lot of our work at the museum is about breathing life into the stories of the Nobel Prize laureates and their achievements, and this was a festival that really touched many people and delighted the residents of Stockholm,” says Erika Lanner, Director of the Nobel Prize Museum.

The task of organising this year’s Nobel Week Lights festival is already under way, including discussions among the partner organisations, artists, lighting designers, universities and colleges.

”Since last year, we have pursued a dialogue with artists and lighting designers, gathering proposals for light installations inspired by the Nobel Prize. It is fantastic that we can implement Nobel Week Lights again this year in collaboration with the City of Stockholm and the Nobel Prize Museum,” says Lara Szabo Greisman, one of the festival’s initiators.

According to plans, this year’s event will run from 4 – 13 December during the 2021 Nobel Week.

The City of Stockholm’s estimates that more than 200,000 people visited last year’s Nobel Week Lights festival. More than a million people were reached by information about the light installations via the Nobel Prize Museum’s social media sites.

The Nobel Prize shows that ideas can change the world. The courage, creativity and perseverance of the Nobel Laureates inspire us and give us hope for the future. Films, in-depth tours, and artefacts tell the stories of the Laureates and their contributions ‘for the greatest benefit to humankind’. Based on the Nobel Prize’s unique combination of fields – natural sciences, literature and peace – we examine the greatest challenges of our time and show how we can respond to them through science, humanism and collaboration. With our exhibitions, school programmes, lectures and conversations, we at the Nobel Prize Museum strive to engage the public in making a better world. Today we are located at Stortorget in Gamla Stan, Stockholm’s Old Town district. We are planning to create a new home for our public outreach activities at Slussen in downtown Stockholm.

Disclaimer: Nobel Prize Museum is not directly or indirectly involved in the pro­cess of nominating or selecting Nobel Laureates. These procedures are strictly confiden­tial and regulated by the Nobel Prize awarding institutions.